Daily word count:  1,452
Total word count:  41,230
Hmmm… I have to write like 900 words a day to get it done on time. Easy, she says… quote me on this later. I am collecting all the 4theWords monsters by typing up my hand written notes from doing Tim Clare’s Couch to 80k writing bootcamp. Do I have 80k of words? I will soon know. What I do have are some neat ideas I had forgotten I wrote.
It’s very strange to read something in your own handwriting and have no memory of where it came from.
Seriously, if you get an idea, WRITE IT DOWN.
Speaking of ideas, another one for the file marked ‘idea idea idea’, I saw an article about a small town offering the local pub as the prize in a contest with $100 entry fee.

Rather than sell The Shirley, Robyn and Allan Cox have asked people to pay $100 to put forward an idea for the Victorian building.
After a three-month tender process the building will be handed over to the applicant who has the best plan for the pub.

Besides the adorable name, the pub is called The Shirley, what happens to the person with the great idea who gets handed a whole pub with a functioning bed and breakfast? In a small town of 414 people? One of the ideas is a shelter for domestic violence victims. Oh now, the plot bunnies are hopping.
Speaking of bunnies, Lou’s theme from the art exhibition was hares. [Look - it’s close enough to a decent segue. Don’t @ me]
It is okay to put her art here with a link. She uses Instagram until her website is up and running. Now that is a headache I understand. 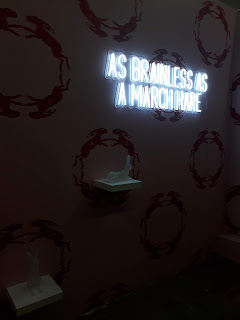 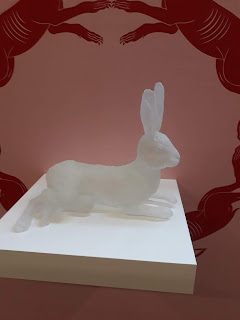