Daily word count:  0
Total word count:  41,842
I wrote 7,692 words in another project. I know… I know… believe me I am already shouting at myself.
Life with an ADHD brain - episode one million, eight hundred thousand…
The other day I saw an email from a kitchen supply place and it listed a Kugelhopf Pan. I have no idea what that is, so I search it. A few minutes later I’m watching videos on how to make a Kugelhopf cake in your Kugelhopf pan and one minute into that I’m printing out the recipe and searching in the cupboard to see if I have all the ingredients.
Note, at this point I still do not own a Kugelhopf pan. But I reckon a Bundt tin will work just as well, eh?
These women are complaining that making yeast bread is hard. Omg. Have they not ever made cinnamon scrolls? This is just a chocolate version of them stuffed in a Bundt tin. And it’s the easiest thing to make yeast dough in the bread maker.
Quote me on this when I put up a shot of my ugly baking attempts.
Okay, today I am making the Kugelhopf… and it doesn’t look too bad. It liked the bread maker so much there was a chance the dough was going to overflow. But, there was definitely not enough flour in that recipe, so I folded in a bit more before it was stable enough to roll and spread with chocolate. 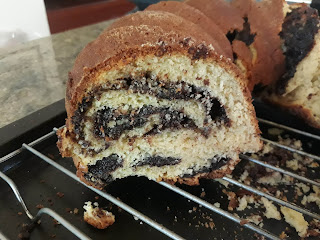 It got eaten pretty quickly but most tasters thought the cinnamon scroll dough was nicer. Next idea: make a frankenKugelhopf with dough from the other recipe or make chocolate scrolls?
Mmmm chocolate.
And in more articles for the idea file, I saw a story about the provenance argument over a Brett Whiteley painting. It’s titled ‘the artist’s mother’ but it seems like it isn’t Whiteley’s mother, nor is he the artist. Intriguing. There’s a lot of what ifs that could come from that.
Who painted it? Is it a self-portrait and a large hint? What if it’s his real mother?