Daily word count:  4,376
Total word count:  47,102
Not a bad day.
My desk is in the corner of a large room. I have a standing desk as well but what I don’t have is the space to put up things on the walls. I love index cards but I can’t spread them out anywhere at the moment.
The dining table is currently occupied by a four person Warhammer 40k game…
Sighs.
Months ago I picked up three super light corkboards from Kmart - one for each Act. But then I didn’t know what to do with them; I had nowhere to hang them on the wall. But, I had an idea. I thought I might be able to hang them off an Ikea Ivar book ends that slide onto the shelves and voila… it worked. If I hang them sideways. 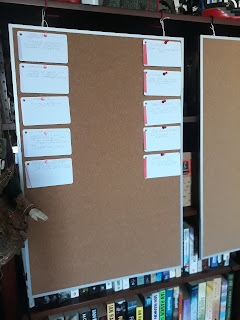 In a truly mind hurting example of my brain function, I wrote out the Romance Beat sheet cards from the Gwen Hayes book, and then edged them in washi tape that matches the colours of the Scrivener template she also gives you in a link in the e-book. Purple, red, teal, and orange. Then I dug in the jar and found push pins in colours to match, as well.
Why, brain, why?
Is the rest of my life this terrifyingly organised? No, of course not. *rolls eyes at self*
Given this particular nanowrimo project is a last minute, non plotted pile of words, with a lot of super helpful notes like: then Oliver %% whatever his damn name is said,
OR %% father’s GF,
OR %% make sure you lampshade this earlier;
Or whatever convoluted and vague notes I’ve left for myself, it will take some work to disentangle it. It’s not even in any kind of chronological order. I will have to sit down with the 50k I’ve written and work out what goes where, what can be kept, or edited, and what scenes are missing. And that’s why I’ll need those index cards.
But with less than 3k words left, I’m going to make it, which is 50k words more than I had at the start of the month.
And I saw ANOTHER idea for the file box.
A Japanese woman hired an actor to pretend to be the father of her daughter. After ten years, the daughter still does not know, he is not her real father.
WHAT? ARE YOU KIDDING? I swear I’ve read that fanfic. But really, how do you even start untying that Gordion knot. Does he care about the girl? Does he want to be her father? Can they get married now and live happily ever after?
So many questions…
And funnily enough, my nano project is about fake dating, doubling down on the lie, and then how you go about starting to fix it when it inevitably goes wrong.
Links:
'I hired a man to pretend to be mydaughter’s dad - and she doesn't know'
Romancing the Beat: Story Structure for Romance Novels (How to Write Kissing Books Book 1) by Gwen Hayes