Well… so much for plotting plans. Plans to plot? Whatever
Word count: 2,421
I was making spinach lasagne and sourdough at midnight on day 3. I wanted to use up a big bunch of spinach that had been in the fridge a little too long and some milk that was close to the use-by date. I’m having issues with my sourdough.
I may have to chuck out most of my sourdough starter and well, start again. [wait… is this a metaphor for writing???]
I thought it might be the flour batch, but no. I opened a new packet of flour and this is what the finished result looks like. Check it out. That is sad. [ugh… Trump has stolen the word sad from us all…] Okay, that is a poor excuse for a loaf. 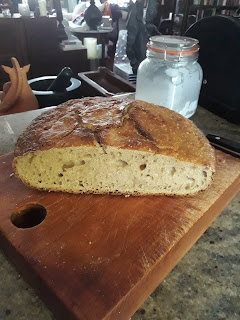 I shall eat it anyway. I can toast slices, or it can be made into Tuscan bread Soup, or into breadcrumbs.
I spent the day doing chores and errands with my earbuds firmly in, and managed to get through The Shape of Water. There was a moment where a woman walked around a shelf in Kmart to see me frozen in the aisle listening. [Some days I don’t multitask well, thanks ADHD]
I am getting a better idea of 4theWords. There are quests. And you have to find and defeat the monsters that drop the right items for you to satisfy the quests.
I did drag out the Plotto book while kid 1 watched some more ‘I Claudius’. Kid 1 is not good with recognising faces but there was no way he missed Patrick Stewart’s voice. And he has hair.
‘Don’t eat the figs’, may become a new saying for Kid 1.
And then there was much research and discussion of various players in the Roman drama. I said we have the book somewhere about the house. The scene where the two lady poisoners lunch and eye each other off whilst carefully eating and comparing poison notes is amazing. I heard an interview with Sir Derek Jacobi on Audible saying he wasn’t supposed to get the role, as he was too young, but a producer saw him in a stage production where he had to age, and recommended him. You can hear the size of the sets and the makeup is not bad for such an old production. [Looks better than Henry Cavill’s Geralt wig…]
Plotto, also, is very old-fashioned but there are so many plot ideas in there that I just know I’ve read or watched. It was a favourite of Hitchcock which is how I stumbled onto it in the first place, I think. E A Deverell talks of it often, too.
And would you believe it, there’s a tag for fake dating:
#83 B pretends that she is engaged to be married in order to be free of certain annoying experiences.
Which is part of my plot. I do love a good trope.
Links:
I Claudius
EA Deverell’s website
[sign up for Museletters? Oh, that’s good.]

Email ThisBlogThis!Share to TwitterShare to FacebookShare to Pinterest
Labels: nanowrimo